The Magic of PhotoShop? 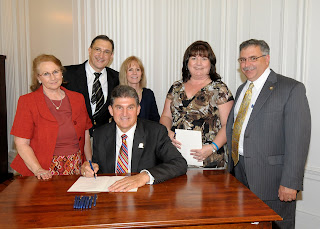 The Legislature released this photo from one of the week's ceremonial bill signings by Gov. Joe Manchin (at desk).

But that's apparently not how one newspaper published it.

The bill creates “Erin’s Law," which increases the penalty for a fatal hit-and-run. As The Associated Press reported, it "is named for West Virginia University nursing student Erin Keener, who was killed in Fairmont in 2005 by a driver who then left the scene."

The delegates are all Marion County Democrats who represent the Keeners' district, and were the bill's leading sponsors.

The newspaper's caption notes that it is both a "submitted photo" and a "photo illustration."

It's Sure Been Swell

Forty-two months and 2,489 posts later, I am migrating completely to Twitter. I encourage all to continue following me there for a just-the-facts approach to West Virginia government and politics. I remain grateful to this blog's readers for their years of support and encouragement.

Posted by Lawrence Messina at 10:00 AM 0 comments

Despite revenues falling short of estimates for the fiscal year, West Virginia expects to collect more in general revenue taxes that it will spend because of midyear budget cuts, The Associated Press reports.

The cuts "reduced spending by more than necessary to keep the state budget balanced," the article said.

Deputy Revenue Secretary Mark Muchow tells AP that "a rebounding economy has helped the state avoid a more serious shortfall," and "has also prompted the administration to project revenues of $3.74 billion for the budget year that begins July 1," the article said. "That would represent the first year-to-year growth since 2008."

They Voted for You: Unemployment & Recovery

Rep. Shelley Moore Capito, R-2nd, voted against the measure along with all but one GOP House member present for the 215-204 roll call.

The legislation would provide "unemployment checks to people out of work more than six months and revive tax breaks popular with families and businesses," The Associated Press reports. "But spending cuts demanded by Democratic moderates unhappy about voting to increase the deficit will mean layoffs next year by state governments and no health insurance subsidies for people laid off after Memorial Day."

The Associated Press looks at the daunting task facing the state agency assigned to help West Virginia carry out the relevant provisions of the federal health care overhaul.

Martha Walker, acting director of the Governor's Office of Health Enhancement and Lifestyle Planning, outlined her initial game plan to lawmakers during legislative interim meetings. She later elaborated on some of the approaching deadlines, costs, benefits and changes to AP.

Two mines were also closed temporarily in the course of the blitz, AP's Tim Huber writes.

"Inspectors targeted 51 problem mines immediately after Manchin ordered the inspections April 14," the article said. "The remainder of the state's approximately 200 underground coal mines were examined within a week."

Gov. Joe Manchin soon hopes to launch Country Roads, a federal political action committee that "would operate under federal rules and raise funds that Manchin could spend to support candidates and attend political events around the country," The Associated Press reports.

The governor tells AP that he sees the leadership PAC as a vehicle "for me to continue to tell the story of what we do in West Virginia... It gives me a chance to talk about all the contributions we have made to make this country great, and hopefully to set the record straight."

The article observes that "forming a leadership committee is a typical step for people who aspire to higher office." When asked about his election plans for 2012, when he is barred from running again for governor, Manchin told AP "I'm going to put myself in the best position possible to serve, and this gives me the vehicle to do that."

"At least two other sitting governors have leadership PACs, according to the nonpartisan Center for Responsive Politics," the article said. "Minnesota Gov. Tim Pawlenty started his Freedom First PAC in late 2009, while Haley's PAC was formed after Mississippi Gov. Haley Barbour began his first term in 2004. Both are considered possible GOP presidential candidates."

MetroNews may have had first word of Manchin's PAC. The Charleston Daily Mail has an article as well.

Ihlenfeld, 38, has been a prosecutor in both Brooke and Ohio counties, and is a graduate of West Virginia University's law school, the article said.

Posted by Lawrence Messina at 9:30 AM 0 comments

They Voted for You: Don't Ask, Don't Tell

U.S. Rep. Alan Mollohan, D-1st, voted for a measure that The Associated Press explains would "repeal the 1993 law that allows gay people to serve in the armed services only if they hide their sexual orientation."

Earlier, Sen. Robert C. Byrd helped the Senate Armed Services Committee endorse a similar repeal in a 16-12 vote, AP reports. "The full Senate is expected to take up the defense bill next month, and Republicans are threatening a filibuster if the change in policy toward gays remains in the legislation," the article said.

House opponents "cited the letters of four military service chiefs urging Congress to hold off on legislation until the military gains a full assessment of the effects the repeal might have on military life and readiness," AP reports. "The House and Senate amendments stipulate that the repeal would not become law until after the study is completed and until the president, the defense secretary and the Joint Chiefs of Staff certify that it will not have negative effects on the military's fighting ability."

Larry Sabato's Crystal Ball is the latest of the national political handicappers to recast or keep West Virginia's 1st Congressional District race as a "toss-up" in the wake of state Sen. Mike Oliverio's defeat of incumbent Rep. Alan Mollohan in the May 11 Democratic primary.

The seat of Rep. Shelley Moore Capito, R-3rd, is either unranked or deemed "safe Republican" by these observers.

Quote of the Day

"That was perhaps too much information."

-- U.S. House Natural Resources Chairman Nick Rahall, D-W.Va., after Obama Interior Secretary Ken Salazar told his committee that "he sent his deputy, David Hayes, to the Gulf Coast 'without a change of underwear' the day after the deadly blast" that preceded the Gulf oil spill. The Wall Street Journal's Washington Wire reported on Rahall's comment.

With The Associated Press reporting on the apparent forced resignation of S. Elizabeth Birnbaum as director of the U.S. Minerals Management Service, those reacting (updated) include U.S. Rep. Nick Rahall, D-W.Va.

Rahall is chairman of the House Committee on Natural Resources. It quizzed Birnbaum and her immediate boss, Interior Secretary Ken Salazar, among other witnesses at a Wednesday hearing. C-SPAN has video.

(Update: Rahall told AP that "the departure of Elizabeth Birnbaum from MMS does not address the root problem. She has only been the public face of MMS for 11 months and the most serious allegations occurred prior to her tenure... This might on the surface be a good start but must not be the end game.)

Rahall's committee is conducting a series of hearings as it reviews a spill that AP reports has "has already surpassed the Exxon Valdez as the worst in U.S. history."

The committee was scheduled to hear from the heads of both BP America and Transocean Ltd. during a Thursday session.

USA Today reported earlier that Rahall had welcomed the announced departure of the MMS' administrator for offshore drilling programs. It quoted Rahall as saying he hoped it "signaled an understanding that wholesale changes 'will be necessary to fundamentally reform MMS.'"

AP also reported that Rahall had offered initial praise for Salazar's proposal to abolish the MMS as "a bold initiative to shake up a badly troubled agency by separating its three basic missions."

And USA Today is among those quoting Rahall as he and "other members of Congress have voiced concern about the government's response to the spill."

The Wall Street Journal's Washington Wire recently caught a decidedly different response from Rahall to a Salazar comment regarding the spill.

The Senate has confirmed the appointment of Booth Goodwin as U.S. Attorney for the district, the article said.

"Goodwin has been an assistant federal prosecutor for eight years," AP reports. "He won praise for his role in an investigation of widespread political corruption in southern West Virginia."

The Cost of Dropping Out

As West Virginia wrestles to craft improvements to its public schools, new research puts a price tag on the drain to metropolitan area economies caused by dropouts, The Associated Press reports.

"The Washington, D.C. based Alliance for Excellent Education estimates that keeping half those children in school would increase annual incomes by a combined $17.3 million for the Charleston, Huntington, Morgantown, Weirton and Wheeling metro areas," the article said.

The alliance's president, former Gov. Bob Wise shared its research at a Culture Center event sponsored by the West Virginia Education Alliance. Besides AP, coverage comes from
Public Broadcasting (with audio), The Charleston Gazette, the Charleston Daily Mail and MetroNews.